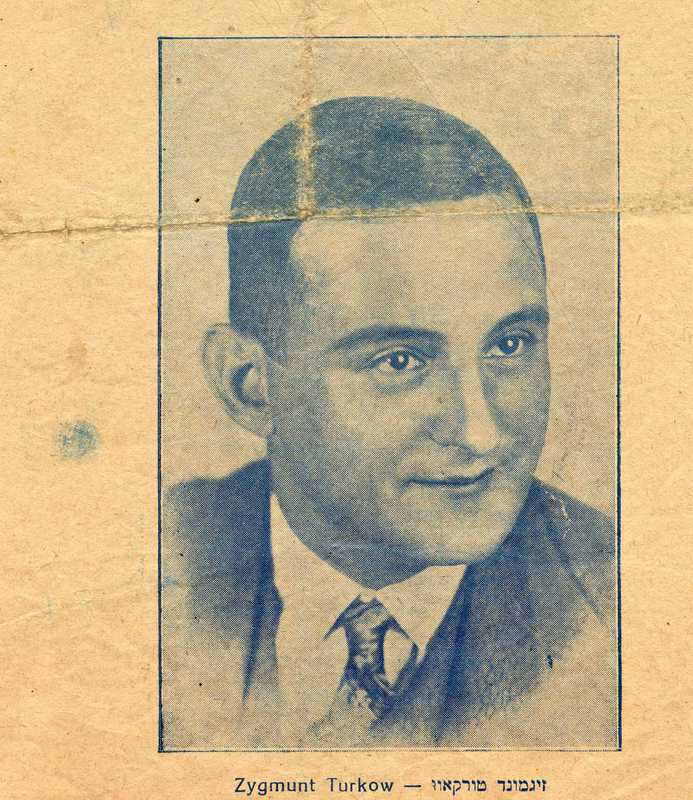 "In contrast to the old ensemble Kaminski Theater, where most of the people had been old and had a primitive education, our new ensemble consisted of young, intelligent people. One of them was the twenty-year-old Sigmund Turkow, a graduate of the Polish School of Theater, directed by the famous Alexander Zelverovitch. I knew Turkow and had even gone to see him in a small Polish theater where he performed with a group from his school. He was playing leading roles there and even then had demonstrated his maturity as an actor." -Ida Kaminska, My Life, My Theater

The theater and film director and actor Zygmunt Turkow was one of three brothers along with Jonas and Marek Turkow who pursued their shared passion for the stage and for communal activism. The Turkow brothers were born into a comfortable middle-class Warsaw family. Zygmunt received a traditional Jewish education and attended secular schools as well as Russian and Polish drama schools. He also displayed a talent for painting and sculpture. Zygmunt performed briefly on the Polish stage, including the famed Teatr Polski in Warsaw. He also performed in Yiddish, under the aegis of Hazomir, the cultural society founded by Y. L. Peretz, and in Hebrew under a troupe directed by Naḥum Tsemakh, the future founder of Habimah, a Hebrew repertory company. In 1916, Turkow was one of the organizers of the Artistic Corner (Artistishe Vinkele), an amateur company that staged a literary repertoire of one-act plays. In 1917, he began to work with the Kaminski troupe, and married Ida Kaminska the following year.

After briefly working in Russian theater in Kharkov, Turkow returned to Warsaw in 1920. It was at Warsaw’s Tsentral Theater that he staged a series of critically acclaimed productions of European works. Der karger, Arn Aynhorn’s (1884-1942) Yiddish translation of Molière’s The Miser (L'Avare, 1921), was directed by and starred Turkow, establishing his reputation as a prodigy and defining the direction of his theatrical efforts during this period. Yiddish theater, Turkow insisted, must not confine itself to the “Jewish street” but should bring the entire world to its audiences. Subsequent productions (performed roughly between 1920 and 1923) included translations of Gogol’s The Inspector General (Der revizor),Molière’s The Love Doctor (L’amour médecin), and an adaptation of Leonid Andreyev’s The Seven Who Were Hanged (Rasskaz o semi poveshenykh), the latter of which became part of the Yiddish theater repertoire. Turkow produced Yiddish plays in innovative ways. He codirected Sholem Asch's Motke the Thief (Motke ganev), which attained a wild popularity second only to that of The Dybbuk, and he produced Shloyme Ettinger’s (1803-1856) maskilic comedy Serkele, as well as Mendele Moykher Sforim’s (1835-1917) The Conscription (Der priziv).

From 1924 to 1928, with Ida Kaminska, Turkow directed the Warsaw Yiddish Art Theater, continuing to bring the themes and styles of contemporary European theater to the Yiddish stage. As a director, he sought to subject the elements of every production—scenery, costumes, music, choreography, lighting, and acting—to a single conception appropriate to each work. He was one of the finest Yiddish actors of his time, capable of superb character interpretation. As a director, however, he strove to lead actors away from grandstanding and toward ensemble play.

From 1929 to 1938, Turkow collaborated with various theatrical companies in Poland, including the Vilner Troupe, as well as with Yiddish companies abroad. In 1938 in Lwow, he reestablished the VYKT, but this time Yiddish plays dominated his repertoire, staged in innovative ways, but with the explicit goal of developing a theatrical style rooted in Jewish tradition. Particularly in three new productions—Goldfaden's (1840-1908) classic operettas Shulamis and Bar Kokhba, and Yisroel Ashendorf’s (1909-1956) Di broder zinger (The Broder Singers)—Turkow sought to create a kind of contemporary folksshpil (folk play)—a synthesis of drama, comedy, and operetta, interweaving serious and comic elements, music, singing, and dance. Such theater required highly skilled, multi-talented performers, whom Turkow recruited from both theater and opera. The VYKT’s Shulamis played in Warsaw under German attack; its final performance was on 5 September 1939 when a bomb hit the theater.

Turkow also worked in film. He directed The Vow (Tkies kaf), whose theme of frustrated love resembles that of Der dibek, and played the role of Elijah. In 1937, the film was remade in a sound version directed by Henryk Szaro (1900-1942) with Turkow as artistic director; Turkow again took the role of Elijah. In 1937, Turkow also codirected Jolly Beggars (Freylekhe kabtsonim) with comedian team Shimen Dzigan (1905-1980) and Yisroel Schumacher (1908-1961), and starred in Joseph Green’s (1900-1996) Der purim-shpiler (1937).