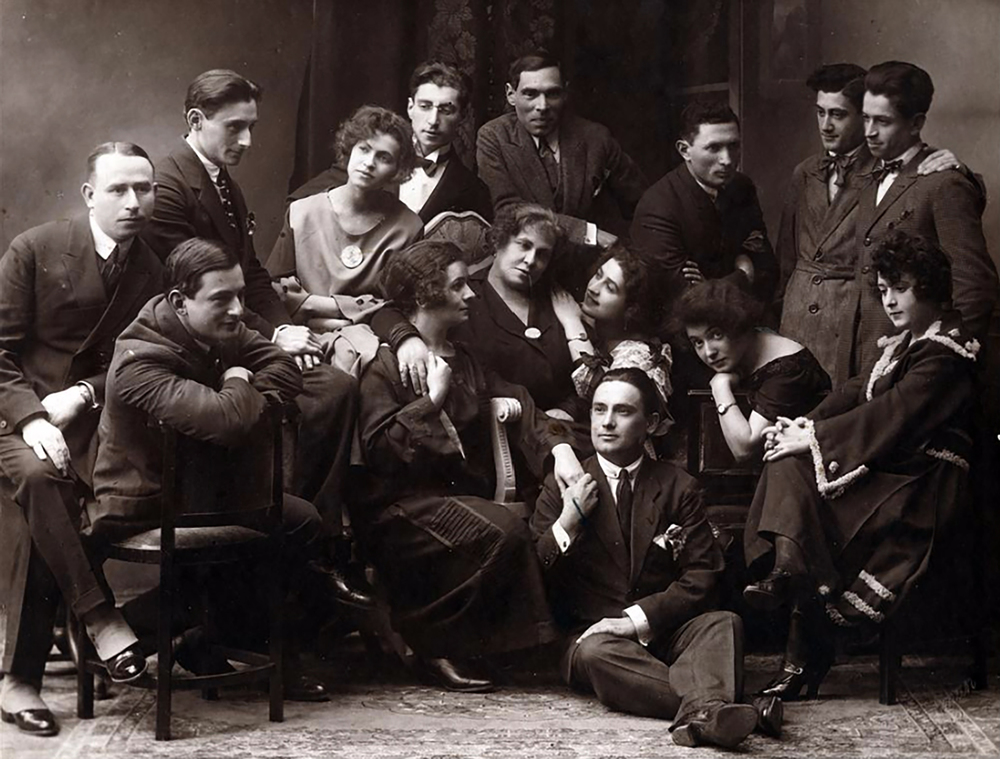 A studio portrait of the Warsaw Yiddish Art Theater with Esther-Rachel Kaminska, seated at center. Her daughter, Ida Kaminska, is standing top left, while her son-in-law, Zygmunt Turkow, is seated front left. Taken circa 1924.

1919: A BANNER YEAR FOR YIDDISH THEATER

The Theater Museum founded in Warsaw in 1926 was a product of Poland’s theater scene that really begins to come alive with the independence of Poland. The twenty-year period of independent Poland (that begins in 1919 following World War I and ends with the Nazi conquest in 1939) was the most intensely creative and innovative ever seen by the Yiddish theater. Before 1919, Yiddish theater in Eastern Europe was a backwater affair: sporadic, subject to closures or prohibitions. When Poland signed the Paris Peace Treaty in 1919, which included its commitment to protect minority cultures, a Yiddish Actors Union immediately sprang up, and the Yiddish theater began to truly blossom in Warsaw, Lódź, Vilna, and cities and towns beyond.

Besides supporting a robust commercial theater, interwar Poland gave rise to a Yiddish theater community that sought high literary quality and took artistic chances, sought to challenge what theater should be, and, in particular, what Jewish theater should be. They considered their work experimental and avant-garde and they considered the idea of ensemble theater a religious truth and looked down on celebrity-driven theater as vulgar and "American." Surviving placards and programs of these more literary productions often feature long lists of creative sources, differentiating, for instance, among director, playwright, translator, choreographer, sound director, dramaturge, stage director, and set and costume designers. The actors' collaborative spirit was an expression of their socialist-oriented politics, which inspired them to seek out working-class audiences.

Poland's Union of Yiddish Actors (Yidisher profesyonaler artistn farayn in Poyln) was crucial to the efflorescence of Yiddish theater. The union tracked and coordinated the work of its members throughout Poland and abroad: it demanded dues, taxed theaters based on their success and number of performances, and also disbursed benefits to actors who fell ill or who could not otherwise work. While the Polish government did not go so far as to subsidize Yiddish theater (as it was expected to do according to the Treaty to which it was signatory), it also did not stifle it. With freedom from the Russian government, actors organized themselves and set to work. The theater museum established seven years later in Warsaw, reflected the intensity of this artistic community.

« Previous Section | Poland’s Yiddish Theater and Its Museum | Next Section »