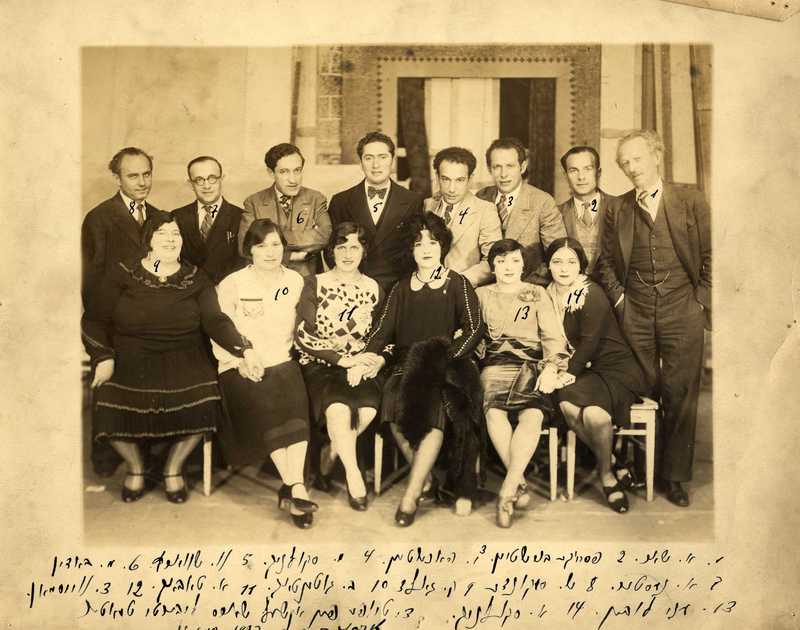 Above is a photo of actor and director Anshel Shor (1871-1942) and his troupe at the Liberty Theater, located in Brooklyn at the corner of Liberty and Stone Avenues. Shor is standing on the right. His wife, actress Dora Weisman, is seated in the middle-right. Next to Shor is the supremely talented performer Pesach Bernstein (1896-1986), and middle-left is Menashe Skulnik (1890-1970)  dubbed the "East Side's Chaplin" by the New York Evening Journal in 1935. Standing at the far left is Sholom Secunda.  Along with Abraham Ellstein (1907-1963), Joseph Rumshinsky, and Alexander Olshanetsky, Sholom Secunda (1894-1974) was one of the "Big Four of Second Avenue." They are most remembered for their hit songs, but were engaged as resident composers in theaters, orchestra conductors, arrangers, and accompanists.

“The Era of The Big Four of Second Avenue, 1930s and 1940s,” YIVO Online Exhibitions, accessed February 7, 2023, https://ataleoftwomuseums.yivo.org/items/show/2307.
Submit a transcription, translation or additional information on the song or the performer