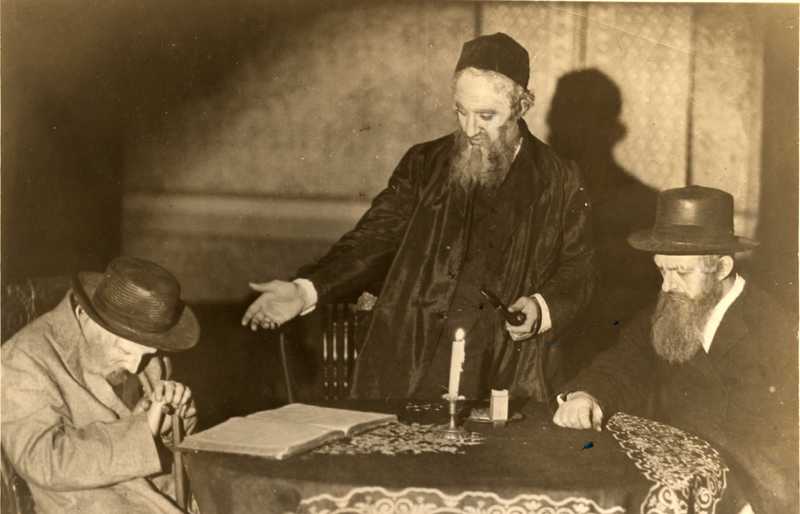 A photo of Maurice Schwartz in a production of Leivik's Shop in New York.

Later heirs of Jacob Gordin's realism was the poet-playwright H. Leivik and the playwright Leon Kobrin.

Leivik Halpern was born near Minsk in present-day Belarus on December 25, 1888. He received a traditional education and became politically radicalized at the time of the 1905 Revolution. Leivik was arrested for Bundist activity in 1906 at the age of 18, he was sentenced to hard labor in a Moscow prison, then exiled to Siberia. After three years, Leivik escaped.  He then headed to the United States in 1913. Leivik identified with the American-Yiddish literary group The Young (Di yunge) and established himself as a poet before turning to the stage.  His first performed play was Rags (Shmates), a four-act drama, which was staged in 1921 by Maurice Schwartz. Since then, it remained in the repertoire of the Yiddish Art Theatre. His other best known plays include Shop and The Golem.

Not unlike Jacob Gordin whose close ties with Russia and Russian literature defined his work, Osip Dymov wrote his first plays for the stage in his native Russian. His first play Golos krovi (The Voice of Blood) was staged in 1903 at the Maly Theatre in Saint Petersburg. Three years later, his play Slushay, Izrail! / Shema‘ Yisra’el (Hear O Israel) was dedicated to the victims of the Białystok pogrom of 1906, and represented his first involvement with Jewish themes. The latter work opened at the Sovremenii Theater in 1907 and was praised by Vladimir Jabotinsky. Dymov’s drama Vechnyi strannik (The Eternal Wanderer; 1913), concerning problems of Jewish emigration, was translated into Hebrew and performed in 1913 for delegates to the World Zionist Congress in Vienna. The production was directed by Naḥum Tsemaḥ, the eventual founder of the Habimah.

In 1913, at the invitation of the Yiddish actor and theater impresario Boris Thomashefsky (1866-1939), Dymov moved to the United States. Once in the United States, Dymov wrote exclusively in Yiddish and his plays were often produced by Thomashefsky and David Kessler. Among the more popular of his plays from this time were Yoshke muzikant (Yoshke the Musician; known also as Der zinger fun zayn troyer [The Singer of His Sorrow]; 1914) and Bronks Ekspres (Bronx Express; 1919). The latter play was translated into English and produced on Broadway in 1922.

Dymov sought to improve the artistic quality of Yiddish theater, collaborating with Maurice Schwartz and Rudolf Schildkraut (1862-1930). From 1927 to 1932, Dymov worked in Germany where his plays formed part of the repertoire of the renowned Deutsches Theater which was directed by his long-time colleague and friend, Max Reinhardt. When Dymov returned to the United States, he continued to write plays and publish in the Yiddish press. Dymov was also a screenwriter, creating Der Vilner shtot khazn (Cantor of Vilna [also known as Overture to Glory]; 1940) with Yankev Glatshteyn (1896-1971). In 1948, the founder and editor in chief of the Forverts, Abraham Cahan (1860-1951), formed a committee to publish Dymov’s collected works, but the project was not ultimately pursued.

A Yiddish playwright, novelist, and pioneer of Yiddish literature in America, Leon Kobrin (1872-1946) was born in Vitebsk, Belarus. He immigrated to the United States in 1892, where he worked in sweatshops in New York, Philadelphia, and Hoboken, and he later sold newspapers in New York. Initially a journalist, Kobrin later gained fame as a playwright as a disciple of Jacob Gordin. Among one of the most famous Yiddish playwrights of his time, Kobrin was noted for his character-driven works and his dramas were frequently staged in Yiddish theaters. Some of his most popular include Yankl Boyle, Mina (Minnah), and East Side Ghetto. With his wife, Pauline, Kobrin also translated many plays from other languages into Yiddish, including works by Anton Chekhov, Ivan Turgenev, and Guy de Maupassant.