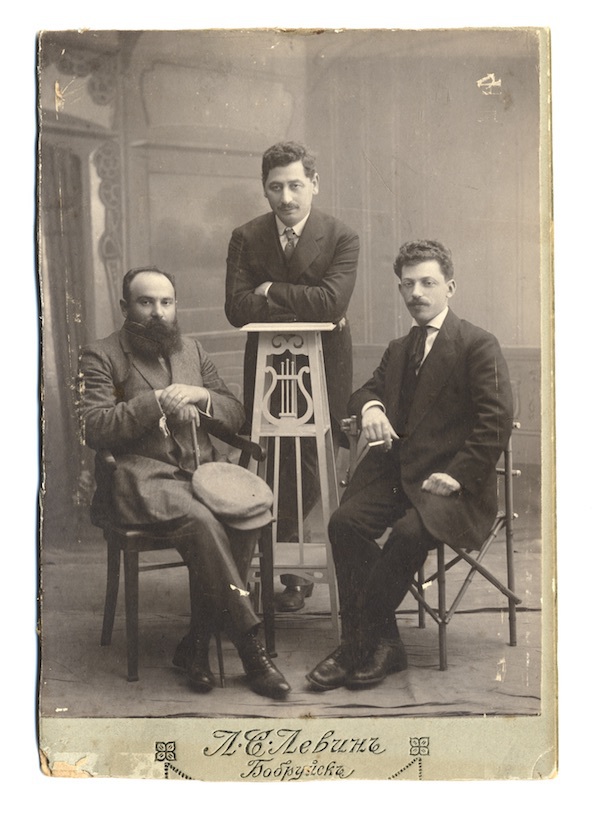 David Pinsky was born in Mogilev in the Russian Empire (present-day Belarus) and was raised in nearby Vitebsky.  At first destined for a career as a rabbi, he had achieved an advanced level in Talmudic studies by the age of 10. Pinsky left home at age 19 originally intending to study medicine in Vienna, Austria, but a visit to the writer and cultural activist Y.L. Peretz in Warsaw convinced him to pursue a literary career instead. He briefly began studies in Vienna but soon returned to Warsaw where he established a strong reputation as a writer and as an advocate of Labor Zionism. He then moved to Berlin in 1896 and, finally, to New York City in 1899.

Pinsky's dark comedy Der Oitzer (The Treasure), written in Yiddish between 1902-1906, was first staged in German by Max Reinhardt in Berlin in 1910. Der Oitzer tells of a sequence of events in which the people of a town dig up and desecrate their own graveyard because they have come to believe there is a treasure buried somewhere in it. Rich and poor, secular and religious, all participate in the frenzy; a supernatural climax involves the souls of the dead that are annoyed by the disruption. Family Tsvi (1904), written in the wake of the Kishinev pogrom, is a call for Jews not to passively accept violence against them. In this tragedy, various Jews—a religious zealot, a socialist from the Bund, a Zionist, and a disillusioned assimilationist—resist the onslaught in different ways, and for different ideologies, but they all resist. The play could not be officially published or openly performed in Imperial Russia but circulated there surreptitiously and was even given clandestine amateur productions.

Another one of Pinsky’s plays, Yenkl der Schmid (Yankel the Smith, 1906), set a new level of frankness in Yiddish-language theater in dealing with sexual passions. Although Yiddish theater was more open to such themes than the English-language theater of the same era, it had mostly entered by way of works translated from miscellaneous European languages. The central couple of the play must balance their passion for each other against their marriages to other people. Ultimately, both return to their marriages, in what Sol Liptzin (1901-1995), a scholar and educator of German and Yiddish literature, describes as "an acceptance of family living that neither negated the joy of the flesh nor avoided moral responsibility”

Born in Kutne (Kutno), Poland, Asch was raised at home “between two worlds." On one side, Asch had full brothers who did business with butchers and gentiles and later moved to the United States. From the other side, he had several step-brothers who prayed in Hassidic conclaves and walked around dressed in their gabardines. Ten children were raised in his home. After elementary school, he moved on to the synagogue study house where he studied on his own. At age fifteen or sixteen, he began to read non-religious books. “Until that time,” explained Asch of himself, “I was a strictly Orthodox, believing Jew. Later I became convinced that the simple Jew, the common man, stood on a higher ethical level compared to the well-educated Hassid.” Asch departed for relatives in a village, studied there with the children, and paid attention all the while to the lives of Polish peasants. As he recounted, “this was my elementary school in life.”

In the first months of 1900, Asch traveled by ship along the Vistula to Warsaw to meet Y. L. Peretz and to show him his own writings. Perets advised Asch to write in Yiddish. In passing, when he was in Peretz’s home, he happened to meet H. D. Nomberg and Avrom Reyzen. Several months later, Asch returned again to Warsaw from Włocławek and read out loud for Peretz his first two stories in Yiddish. In 1904, Asch began his career as a playwright. He composed “theatrical piece in two acts” with the title Tsurikgekumen (Returned) and Mitn shtrom (With the current). In the summer of 1904, Asch made the acquaintance of Polish writers in Zakopane. One of them, Stanisław Witkiewicz, translated Asch’s drama into Polish, and in December 1904 it was staged at a Polish theater in Cracow.

Asch’s next theatrical piece was Meshiekhs tsaytn (Messianic times), a tragedy in three acts (in a subsequent printing with the subtitle: “A kholem fun mayn folk” [A dream of my people]; in a further edition: “A tsaytshtik in dray aktn” [A timely piece in three acts], Vilna, 1906; second edition, Vilna, 1907). Meshiekhs tsaytn was almost simultaneously translated into Polish, Russian, and German, and on February 12, 1906—with the Russian title: “Na puty v Sion” (On the Path to Zion)—it was performed in St. Petersburg with the actress Vera Fyodorovna Komissarzhevskaya in the role of Yustina, and on July 15, 1906 on the Polish stage in Warsaw. In 1907 the publisher “Tsukunft” in Vilna brought out Asch’s play Got fun nekome (God of Vengeance). It was performed in various theaters around the world. A fierce dispute arose in the Yiddish press surrounding this work. In 1908, Asch read aloud before writers in Berlin his play, Shapse tsvi (Shabetai Zvi), published in the third number of Literarishe monatshrift (Monthly literary writings)—an effort to depict the conflict between earthly passion and heavenly purity on the field of the Shabetai Zvi movement. The images were too philosophical, and the drama was never performed on the stage.

During those years, Asch lived in a number of different countries in Europe, and thereafter settled as a resident in Paris, but with the outbreak of WWI he moved to New York where he wrote the play Undzer gloybn (Our beliefs) and a string of new novels (published serially in Forverts) and stories. In 1916 in book form he published (Forverts Publishers) Motke ganef (Motke, the thief), a social novel; the first two parts of it, in which Asch portrays Motke’s childhood, were high art, while the last part rings as if it was artificially added on and reminds one more of literary crime stories. (Taken from YleksikonBlogpost.com).