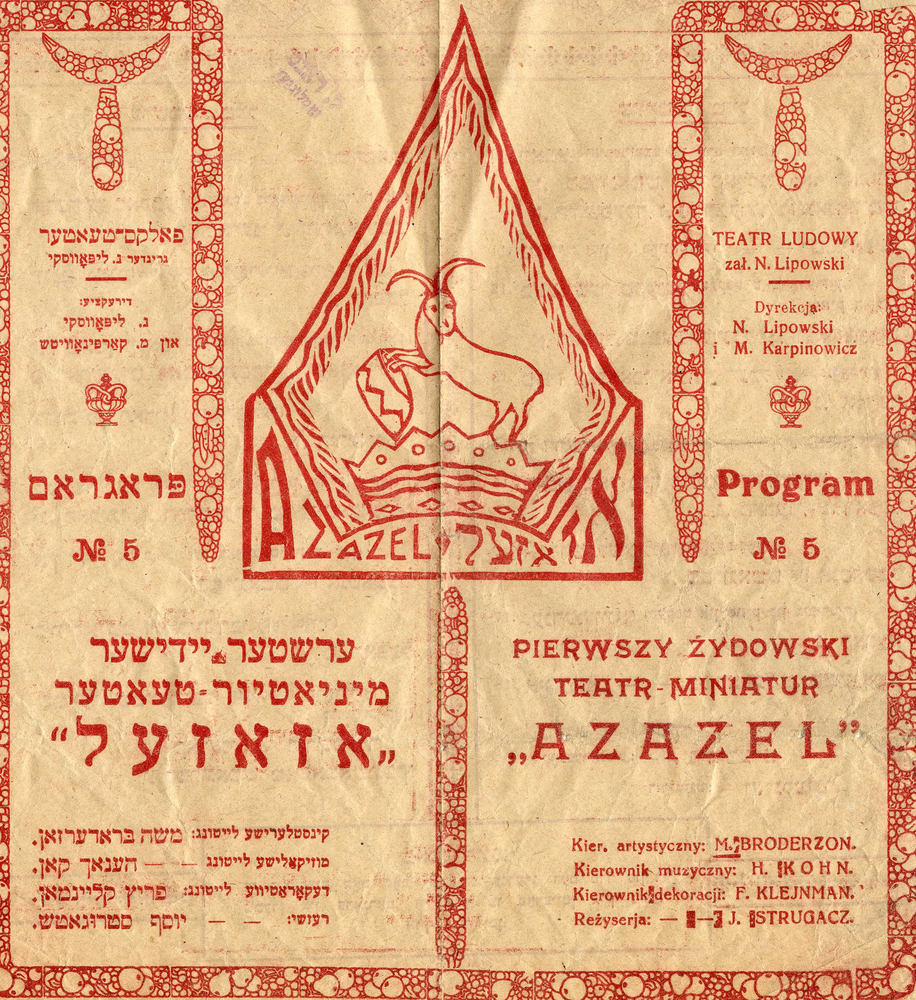 It is unclear when the Azazel Cabaret Theater was founded, with some historical sources claiming that it was founded as early as 1918. It was the brainchild of the cabaret performers Ola Lilit (1906-) and her husband Władysłav Godik (1906-1980). The Biblical word "Azazel"  refers to the destination of the goat released into the desert on Yom Kippur by the High Priest. The second goat is sacrificed. But  the word Azazel is also the name of a fallen angel (mentioned in the Book of Enoch) where it is written in Chapter 10 verse 8: "The whole earth has been corrupted through the works that were taught by Azazel: to him is ascribed all sin." Eventually, Lilit and Godik settled in the Unites States.  The celebrated actor Josef Strugacz also acted and directed in Azazel. He was born in Odessa in 1893, the son and grandson of cantors and sang in synagogue choirs but also attended gymnasium and acted in Russian amateur theater groups.


Azazel made use of texts by Peretz and Sholem Aleichem as well as contemporary material written by Moyshe Broderzon, Itsik Manger, Alter Kacyzne, Y. M. Nayman, Der Tunkeler (Yoysef Tunkel), Yankev Oberzhanek (1891–1943), and Moyshe Nudelman (1905–?). The cabaret quickly became very popular, especially among artists and intellectuals, Jewish and occasionally Polish as well. Particularly celebrated was a number called the “Azazel-Shimmy,” by Broderzon and Kon, and Godik’s bagel-seller skit. The latter was related to efforts by Warsaw police to rid the streets of unlicensed bagel vendors. By 1927, however, financial difficulties forced the company to go on tour and to disband soon after.

“The Azazel Cabaret Theater,” YIVO Online Exhibitions, accessed August 13, 2022, https://ataleoftwomuseums.yivo.org/items/show/2931.
Submit a transcription, translation or additional information on the song or the performer