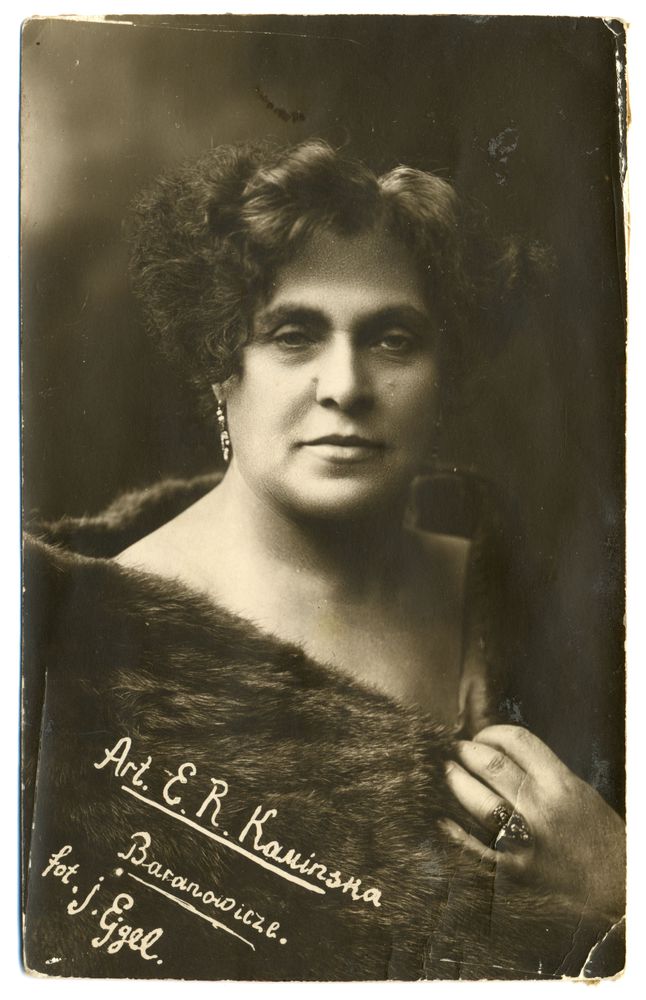 Above, studio portrait of Esther-Rachel Kaminska, Baranowicz, c. 1915. Below, a program from one of her final performances as the cruel and greedy matriarch in the title role in Ettinger's Serkele, c. 1923.

Perhaps Esther-Rachel's greatest cultural significance was as a pioneer of literary Yiddish theater. In 1905, for instance, when official restrictions waned, she began to perform a new kind of play from the artistic repertoire championed by the Warsaw-based herald of literary Yiddish, Y. L. Peretz (1852-1915). Kaminska staged dramatic works by the most literary dramatists of her day, including Sholem Aleichem (1859-1915), Jacob Gordin, David Pinsky (1872-1959), and the Polish-Jewish writer-director Mark Arnsteyn (Arnsztejn) (1879-1943). She also performed some of the earliest translations into Yiddish of such writers as Maxim Gorky (1868-1936), Stanisław Przybyszewski (1868-1927), and Henryk Ibsen (1828-1906).

In 1907, with the collaboration of Arnsteyn, Esther-Rachel's husband, Avrom-Yitskhok Kaminski, founded the Literary Troupe. This was the first company to turn away from the classics of the operetta composer Avrom Goldfaden, who had  laid the theater's cornerstone, and to dedicate itself to the new literary repertoire. The company toured the Russian Empire from 1908 to 1909; its two engagements in St. Petersburg were acclaimed in the Russian liberal press. According to her daughter, Ida, Esther-Rachel eschewed the pathos and posing of many of her contemporaries who were nurtured on the "great repertoire." Instead, she favored acting that was "natural and simple." Performances in the eponymous matriarch roles like Mirele (by Gordin) Serkele (by Ettinger), and Mother Courage (by Bertolt Brecht) led to her canonization by adoring audiences as "Di Mame Ester-Rokhl," the mother of the Yiddish theater.

The story unfolds in Lemberg