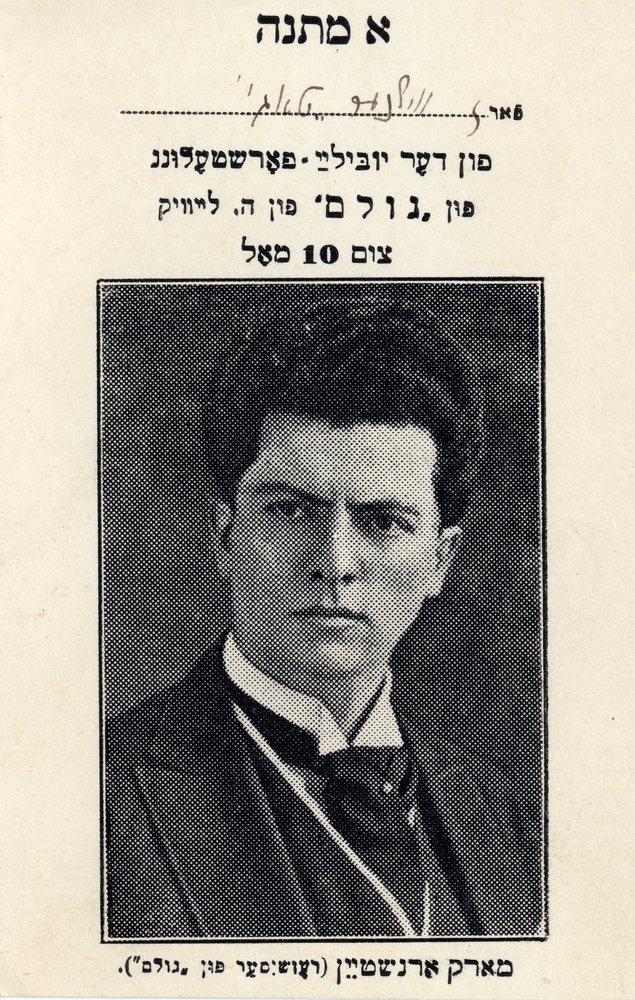 Playwright and theater director Mark Arnshteyn was celebrated in both the Polish and Yiddish-language theater worlds. He was most influential in the world of entertainment with his play Singers, which was the model for the first American talkie, Samuel Raphaelson's (1894-1983) The Jazz Singer.

In the Polish world, he used the pseudonym Andrzej Marek. His extended family included a Yiddish actress, Roze Arnshteyn, and a Polish poet, Franciszka Arnsztajnowa. He was educated in both Jewish and Polish schools and, at an early age, began publishing literature and criticism in both the Yiddish and Polish press. A disciple of Stanisław Przybyszewski (1868-1927), considered the “high priest” of Polish modernism, Arnshteyn launched his theater career by writing Polish plays on Jewish themes for the Warsaw stage. These included Wieczna bajka (The Eternal Story; 1901), a one-act drama about working-class life; and the popular Pieśniarze (Singers; 1902), based on the legendary life of a nineteenth-century Vilna cantor said to have been destroyed by his success on the Warsaw opera stage. Arnshteyn translated these plays into Yiddish respectively titled Dos eybike lid (The Eternal Song) and Der vilner balebesl (The Little Vilna Householder). They were frequently staged by Yiddish companies throughout the world.

Inspired by a group of theater reformers centered around the Yiddish writer Y. L. Peretz (1852-1915), Arnshteyn in 1905 became the first modern stage director of Yiddish theater. He worked with the Esther-Rachel Kaminska Troupe in its early efforts at “literary” theater as well as with groups of young amateurs who laid the foundations for Yiddish dramatic theater during the interwar period. In those years, Arnshteyn was also a pioneer in the Polish film industry, directing features based on Yiddish dramatic productions.

Between 1912 and 1924, Arnshteyn directed and wrote for Yiddish theater in Russia, England, and the Americas. Returning to Poland, he translated and directed a number of celebrated Yiddish plays for the Polish stage, including S. An-ski’s Der dibek (The Dybbuk) in 1925 and H. Leivik’s (1880-1962) Der goylem (The Golem) in 1928. The latter, produced in the Warsaw Circus Arena, marked the first use of a circular stage in the history of Polish theater. Though critically acclaimed, these productions inspired controversy, including accusations in the Yiddish press that they undermined Yiddish theater and encouraged Jewish assimilation. Apparently stung by these accusations, Arnshteyn withdrew to Łódź, where he worked during the 1930s.

Arnshteyn excelled with the nonverbal elements of stagecraft: the spectacular and the painterly. His career was unique among Polish Jewish artists for its devotion to works in both Yiddish and Polish. His dream, Arnshteyn declared, was to build a bridge between Polish and Jewish societies on the basis of dramatic art.