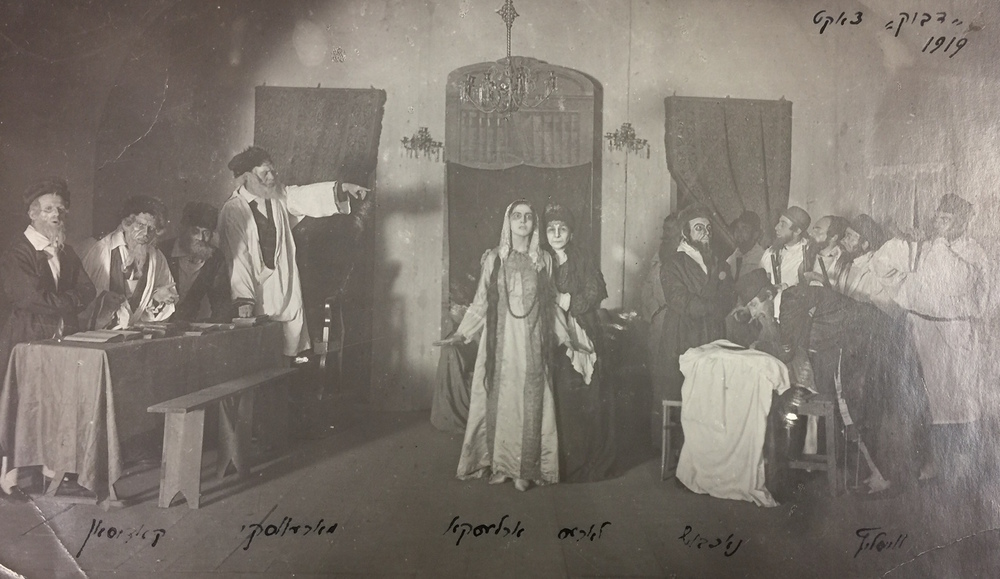 After An-ski’s death in 1920, Vilna Troupe members convened and devised a plan to mount The Dybbuk before the end of the deceased playwright's shloshim, the thirty-day period during which the living may earn merit for the recently deceased through Torah learning.  On December 9, at the end of the thirty days, David Herman, with the help of the managerial skills of Mordechai Mazo, staged the world premiere of The Dybbuk in Yiddish, at the Warsaw Elizeum Theater. Actors Miriam Orelska, Alexander Stein, Avrom Morevski, and Noach Nachbush portrayed Leah, Khanan, Azriel and the Messenger.

This photo features the cast of the premiere, but the date written on it (1919) hints that there may have already been costumed rehearsals (at the very least) earlier than the Warsaw production.

Everyone was falling over their feet, day and night in rehearsal. We didn't eat, we didn't sleep. Mazo argued with the set-builders and shouted, "I'm going to split heads!" -B. Kutsher

“Rehearsing The Dybbuk, 1919,” YIVO Online Exhibitions, accessed August 13, 2022, https://ataleoftwomuseums.yivo.org/items/show/2899.
Submit a transcription, translation or additional information on the song or the performer