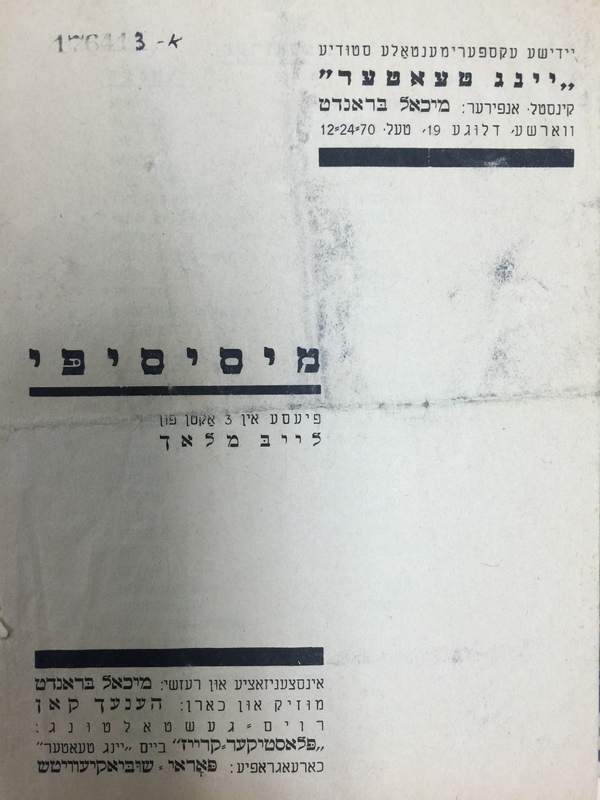 Commissioned by the avant-garde director Michal Weichert, Leib Malach's Mississippi recounts the story of the "Scottsboro Boys" of Alabama, falsely accused of rape in 1931.First staged in Warsaw in 1935, Weichert staged the action among theater-goers throughout the theater space on two-level platforms that  emphasized the power dynamic between whites and blacks in America.  Spotlights were used to shift the action…and even parallel conversations took place on different sides of the performance space.

Although devoid of any Jewish themes, Mississippi is, nonetheless, an original Yiddish play. It was written by L. Malakh (Leybl Zaltsman, 1894-1936), a poet and playwright. Born to a Hasidic father, Malakh left his home province of Radom and eventually reached Warsaw before working as a wallpaper hanger, a baker's apprentice, and painter. He eventually began publishing poetry.  Malakh's plays were produced in New York and in Argentina where he was active in the 1920s. There, he wrote a controversial play about female prostitution and another play, The Maid of Ludmir, a play about Hannah Rochel Verbermacher, famous as the only woman in the three-hundred-year history of Hasidism to function as a rebbe—or charismatic leader—in her own right. The Maid of Ludmir was mounted successfully. Besides Mississippi and The Maid of Ludmir, Malakh gained a literary reputation for his drama The Dregs (Opfal) about Warsaw's Jewish underworld and his controversial depiction of a brothel in Argentina (in Ibergus) that publicly criticized and provoked the lords of the prostitution industry in Buenos Aires.

Mississippi was staged in Warsaw in early 1935 and hundreds of times thereafter at various theaters in Poland, Israel, and the Americas. While the Scottsboro Trial of 1928 played out in the state of Alabama, the playwright thought it best to set the play in Mississippi, a name still closely associated with the American South. A direct reference to The Scottsboro Boys might have been considered a flagrant reference to a cause that was then embraced by the International Left and a red flag on the part of Polish authorities. Henoch Kon composed original music for the production.


Reviewing the play in Literarishe Bleter, Nakhmen Mayzel wrote, "L. Malakhs succeeds in representing a piece of history in an interesting play, and...  invokes the tragedy of the cursed negro question in America and through it, the entirety of the cruelty, the lyingness (lignershkayt), and hypocrisy of the bourgeois society with its "morals" and "ethics" which it uses against an entire race."

[The inside of the program shows that the characters, each played by a different actor, numbered over 30 and are listed as either black or white]

“Mississippi, 1935,” YIVO Online Exhibitions, accessed August 13, 2022, https://ataleoftwomuseums.yivo.org/items/show/2262.
Submit a transcription, translation or additional information on the song or the performer