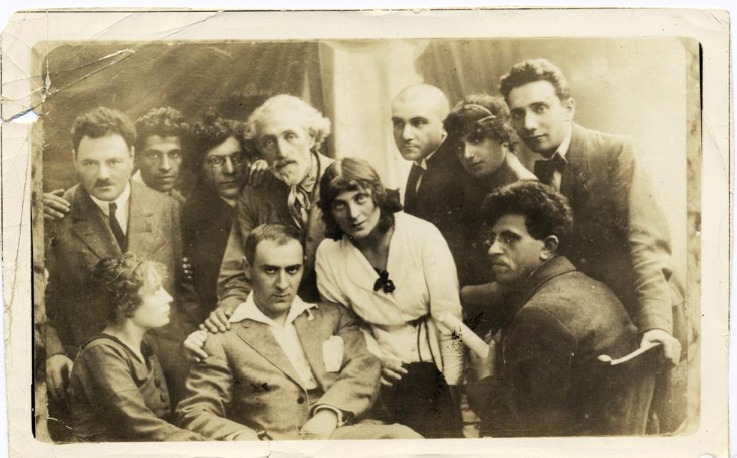 While An-ski had every intention of seeing The Dybbuk on the boards during his lifetime, history and politics interrupted. During World War I (1914-1919), An-ski spent a significant amount of time collecting funds for the relief effort and distributing food and relief to Jewish victims of the war. During these years, he continued to hone his play and test it on private audiences. He secured government permission from the Russian censor, and communicated with directors at the Moscow Art Theater about its production.

He also had close ties with actors of the Vilna Troupe pictured here with An-ski not long before he died. (An-ski is standing, fourth from left, among the actors of the Troupe including Dovid Herman, standing left, Alter Kacyzne, directly to An-ski's right, Sonia Alomis, middle in white shirt near An-ski, Leyb Kadison, seated right, and Mazo, seated middle). The Vilna Troupe, formed in Vilna during the last days of World War I, would be the first to perform the play.

But An-ski himself would not see it in a professional and public production. An-ski died on November 8, 1920 and was buried next to his spiritual partner, the Yiddish writer Y.L. Peretz, in Warsaw's Jewish Cemetery.

“An-ski and Yiddish Actors,” YIVO Online Exhibitions, accessed August 13, 2022, https://ataleoftwomuseums.yivo.org/items/show/2153.
Submit a transcription, translation or additional information on the song or the performer