The Life of Esther-Rachel Kaminska 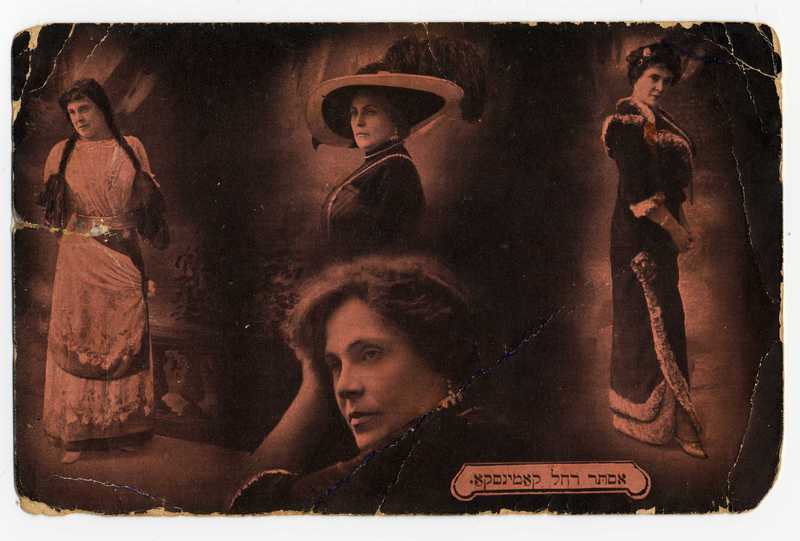 The Life of Esther-Rachel Kaminska

This theater museum collection’s namesake is Esther-Rachel (Ester-Rokhl) Kaminska.  Esther-Rachel’s reputation was marked by her far-reaching talent as a preeminent Yiddish  actor, the maternal presence she projected to her fellow actors and admirers, and the hurdles she overcame in putting on Yiddish theater in the Russian Empire. Esther-Rachel was born in 1870 in a shtetl called Porozovo, Grodno Province, the seventh and final child of an aging cantor and ritual slaughterer and his wife. According to her memoirs, Esther-Rachel always had an ear for song--from those sung by yeshiva students to those of the peasants. She dreamed of life in the big city, where some of her siblings had already gone.

In 1885, at the age of fifteen, she reached Warsaw. There, her older brother introduced her to Yiddish theater's foremost pioneer, Avrom Goldfaden (1840-1908). Goldfaden, a Russian-Jewish intellectual, theater impresario, and composer, had negotiated permission to stage Yiddish theater--mostly operettas--with the Russian government in 1878. Most of these performances by Goldfaden and, eventually, competing impresarios, were staged in Odessa, now in the Ukraine, as well as in Moscow and St. Petersburg.

By 1883, however, the Russian government banned the Yiddish theater once again. The effect of the ban was to push Yiddish theatrical activity westward into Polish lands, away from the city and into towns, with some activity in Warsaw. Soon after Goldfaden and Kaminska’s fateful meeting, Goldfaden gave up on Yiddish theater in the Russian Empire. Kaminska, however, did not. Over the following eight years, Kaminska performed intermittently in Warsaw and in small towns while supporting herself with a range of small jobs, such as cigarette-rolling, umbrella-making, and shoe-shining.

In 1893, she joined a troupe that performed regularly in Warsaw's El Dorado Theater. It was here that she  quickly moved her way from chorister to lead, the first of which was the character of Mirele in Goldfaden's play The Sorceress. Those around her immediately recognized her stage presence and vocal talent. For the following ten years, Kaminska played three Goldfaden characters again and again: Mirele in The Sorceress, Dinah in Bar-kokhve, and Esther in Ahashverus. By the turn of the century, Kaminska and her husband and troupe manager, Avrom-Yitskhok Kaminska (1867-1918), broadened the Yiddish theatrical repertoire with dramatic offerings from the American Yiddish playwright Jacob Gordin (1853-1909) and materials they themselves translated into Yiddish.  For instance, in 1903, they produced Maxim Gorky's best-known play The Lower Depths (1901).

While a range of legal obstacles and government prohibitions to the production of Yiddish-language performance were in place until World War I, Esther-Rachel, in collaboration with other persevering pioneers of Yiddish theater, continued to perform. She, alongside others, worked to reform Yiddish theater according to the highest standards of European drama. As Esther-Rachel grew more ambitious, her renown grew beyond Yiddish-speaking audiences. Her fame unlocked opportunities to perform in more prestigious venues within the Russian Empire, as well as even an invitation to perform in America, where she traveled in 1909. At this point, she was the most acclaimed Yiddish actress in the world.

“The Life of Esther-Rachel Kaminska,” YIVO Online Exhibitions, accessed August 13, 2022, https://ataleoftwomuseums.yivo.org/items/show/2135.
Submit a transcription, translation or additional information on the song or the performer